Workplace Rewards Are Having a Moment

Non-cash incentives and regular recognition are table stakes in a work world that is increasingly remote, actively disengaged and unafraid to set work boundaries. 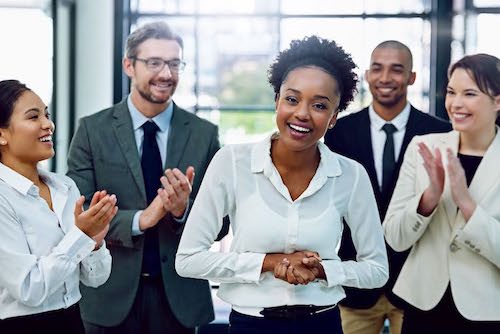 The phrase “may you live in interesting times” is frequently purported to be a translation of an ancient Chinese curse (though at least one online source says it was actually introduced in the 20th century and is decidedly not Chinese). There is agreement, however, that the word “interesting” is meant to be ironic, as the statement is typically used during a time of chaos.

These days, the verb “live” can be aptly substituted with the word “manage,” as in, “may you manage in interesting times.”

The role of managing others is certainly chaotic.

“I think this is the most interesting time we’ve had in the work force since the industrial revolution,” said Stephanie Harris, president of the Incentive Research Foundation, an organization that produces research and education about the use of non-cash incentives. “Managers are faced with a lot right now, beginning with how to manage, motivate, recognize and give equal opportunity to a work force that might be both in the office and at home.”

And, Harris adds, just because someone is a manager doesn’t mean they have the skill set to manage a work force that:

How challenging is it to manage work teams these days? Just listing some workforce-related terms that have been introduced in the last two years provides a good idea: WFH, the Great Resignation, quiet quitting…

“We’ve been watching disengagement, which is really what ‘quiet quitting’ is, for a long time,” Jennifer Moss, the author of “The Burnout Epidemic,” told National Public Radio recently. “People aren’t leaving for more pay. The reason why they are quitting is workload and lack of empathy from their employers. [Employers] need to be considering that people in the workforce want us to care about them. That means more upstream interventions around preventing burnout, increasing mental health and well-being, and analyzing what to do to help support those people who are very tired.”

Showing that you care for your workers has never been more vital to increasing engagement and retaining top performers.

Richelle Suver, vice president of incentives and recognition at One10 LLC, a loyalty and performance improvement provider, says transparency and authenticity are important to making recognition programs feel genuine and not contrived or transactional. Giving recognition in real time and saying things that resonate with the recipient are a must.

Only channel/distributor incentive spend decreased from 2016, a factor of companies dropping some channel partnerships during the pandemic.

Recognizing top-performers in front of their peers has been a best practice for decades. It’s still wise to announce reward recipients to the whole team, but in a work world where co-workers often assemble virtually, respondents to the IRF survey on recognition said one-on-one praise from a supervisor or company executive is most meaningful.

“I think it speaks to the desire for meaningful recognition over ceremony,” Harris says. “The pandemic had people stop and reflect. It’s more important to someone that they have meaningful, thoughtful recognition from their manager than a moment on stage in front of a crowd.”

What motivates you most?

The Incentive Federation Inc. (IFI) estimates that total spend on non-cash incentives is $176.16 billion. That’s up from just over $90 billion total spend the IFI estimated in a 2016 report. Other key findings of the IFI Incentive Marketplace Estimate Research Study include:

Rewards as a Part of Corporate Culture

Kristal Cardone, director of enterprise recognition events at Liberty Mutual Insurance, supports the notion that showing employees they matter with non-cash rewards is a must-have, not a nice-to-have.

“When I look at the intangible motivators, they holistically build up to employees not just going to their job. We need to provide things where they feel a true sense of place and belonging. That can sometimes outpace salary,” Cardone said. Here comments came during a panel discussion sponsored by the IRF.

“Getting employees is more difficult now than it has ever been. We need to be able to tie to the things that make people’s hearts beat. The intangible motivators are the things that are going to get us there,” she added.

Challenges around managing teams will persist as significant shifts in how we work evolve over the next 18 months to two years, says the IRF’s Harris. The push and pull of wanting people back in the office will continue to meet up with people settling into a new groove of working from home — and finding that in a lot of cases it can be very successful.

“The other challenge is a work force that has learned about themselves through the pandemic and is putting boundaries in place,” says Harris. “This whole phenomenon of ‘quiet quitting,’ which I think is a terrible moniker, is people putting boundaries in place and having a more appropriate balance with work. That is a challenge, because you also have the dynamic in the work force where, if you can’t find people to do all the jobs you need them to do, the natural place to go is to expect the individuals who are there to do more. At the same time, you have the perfect storm of individuals saying, ‘I am going to put some limits on how much I will be working.’ ”

The tight labor pool has resulted in increased pay for workers across a broad spectrum of industries. However, how companies show their gratification to workers beyond paychecks is a critical element of retention and attracting new talent.

“Reward and recognition have become differentiators as people evaluate job opportunities they have in front of them,” Harris says. “It’s important that HR professionals include information about incentives and their culture of recognition inside job postings.”

A 2022 study on recognition by Gallup and Workhuman states, “recognition can be a practice, or it can be the way of life at an organization. The distinction between the two makes a noticeable difference in the daily experience of employees.

“Simply having a recognition program is not enough. A culture of recognition is one in which gratitude, praise and appreciation are freely given, regularly received and reach all corners of the organization. Where everyone feels empowered to take part in showing appreciation and commending achievements. Employees want to believe their organizations — i.e., their managers, coworkers and even senior leaders — care about them as people.

“Organizations can show they care by celebrating who employees are and what they bring to the table. When employees are recognized for their contributions and achievements, they feel that they matter. In this way and others, workplace recognition is critical to building an employee experience that meets employees’ human needs.”

Tech Transformation: A Race You Can’t Stop Running In